As a child growing up in the Florida Keys I can remember swimming in our canal and discovering the wildlife surrounding me. Triggerfish, seahorses, needlefish, horseshoe crabs, jellyfish, barracuda, you name it. In the canal walls, we would spot lobster and an occasional octopus. It was a great introduction to ocean life.

When we moved away, I still had those wonderful memories in my head, and I had definitely gotten “sand in my shoes”. When we traveled back to the Keys to sell our house in the early 1990s, I went swimming in the canal once again, but it was a distinctly different experience. The water was murky and there was no life to be found, besides a few sad looking minnows. Gone were all the fascinating creatures. All of this happened in the span of less than ten years.

These days, I have found my way back to the Florida Keys. I spend my free time introducing my children to the wonders of the ocean. We are out on the water whenever humanly possible. Our favorite thing to do is to kayak out to a little island and check out all the wildlife surrounding us. But, though it is beautiful and full of life, we always find plenty of plastic to bring home with us. It’s safe to say we are full-blown plastic patrol ocean guardians.

In just this small slice of the ocean where we live, we try to make whatever difference we can in the quality of the waters surrounding us. If it’s plastic, or any type of garbage, it is coming home with us to be properly disposed of. But we are just one family, and every year, eight million tons of toxic plastic leak into our oceans. What if there was a product that could remove the plastic on a much larger scale? Well, there is!

In this time of the 2021 Climate Change Conference (COP26), when global elites jet-set to Europe and attend their soirees and talk of making change in the world, it is just that – only talk. One company is bypassing the private jets and Champagne galas and actually doing something about the plastic in our oceans and waterways. Richard Hardiman, founder and CEO of RanMarine Technology, a Netherlands based USV (Unmanned Surface Vessels) company, has developed a water-borne drone that harvests plastic waste from the world’s ports, harbors, rivers and marinas in an effort to reduce the effects of plastic pollution on the Earth’s oceans. It is called the WasteShark.

The WasteShark has been exported globally to the USA, UAE, UK, Australia and South Africa. Added to the WasteShark’s ability to collect waste, RanMarine has now also pioneered the collection of live data from water-borne drones, to measure water health quality. With 180 liters (47.5 gallons) of capacity and an eight hour runtime, this hardworking robot can remove 500kg (1100lb) of waste a day. The WasteShark is also easy to use and deploy. Using 4G onboard communications and an easy setup process, launching multiple drones has been made deliberately simple and easy for customers. Additionally, the drone uses advanced battery technology ensuring emission-free operation on the water, and not adding to the water’s pollution. This makes the WasteShark one of the solutions leading the way in the fight against plastic.

The WasteShark can work both manually, operated with a remote, and fully autonomously. The autonomous WasteShark can detect when its battery is low and when its basket is full. It will then return to its docking station, or SharkPod. The WasteShark is equipped for collision avoidance, and is perfect for canals, ports and along waterlines where plastics inevitably meet the ocean. Currently there is one size available, and is not made for open-ocean navigation, but RanMarine is working on a larger WasteShark that can be used for this purpose.

RanMarine will be receiving the innovation award for the WasteShark and will also introduce the SharkPod, the world’s first autonomous floating docking station for waste-clearing drones, at CES 2022 in Las Vegas January 5-8. With the ability to deploy, dock and charge up to five WasteShark drones at any time, this latest tool in pollution-fighting technology will enable ports, harbors and cities to operate a twenty-four hour autonomous solution to remove floating waste from the water. With the ability to remove one ton of waste per drone per day, RanMarine expects the SharkPod to be capable of removing up to one hundred tons or more of debris and waste per month. With the prototype unit that will be deployed in 2022, drones will be able to dock, discharge waste, recharge and redeploy on a continuous twenty-four hour basis, all from a centrally controlled online environment.

You can watch the WasteShark in action here.

I don’t know about you, but I want one.

This article was originally published on OpsLens.com.

Almost every kid loves LEGOs. But they are not made in the USA. The LEGO brand is originally from Denmark and is now manufactured globally – but not in the U.S.

We’ve found an alternative to LEGO. K’NEX are manufactured in Pennsylvania – yes, MADE IN THE USA! They are also compatible with LEGO pieces, so they are a great way to support U.S. companies this holiday season. You can find them on Amazon as well as stores like Target, Walmart and Fat Brain Toys.

With all the shipping delays this Christmas season, why not buy American?

**Full Disclaimer: I have not purchased from this company yet.

A new Federal Trade Commission (FTC) rule will penalize companies making false or misleading claims about where their products are manufactured.

While many are warning of shortages, shipping disturbances and pricier products this Christmas season, it pays to plan ahead for your holiday gift-giving so I’ve decided to launch a series of posts aimed at helping consumers find companies based in the United States that actually sell products manufactured in the United States.

The first company I have chosen to highlight is Fat Brain Toys. A company based out of Nebraska, they began development of their own original line of educational toys. They even have a designated place for American made toys.

I have purchased some of their products and have to say their service and quality of product is exceptional.

As an Amazon Associate I may make a small commission should you purchase an item using my link.

Here at BurpMitt® we are happy to announce that our products are now available on Amazon!

We could write a complete new series of blog posts about this sometimes painful process! After almost a year – we finally did it, the trademark is official!

Very excited to announce that the BurpMitt and the SoakPad are now available at the Swan Bay Resort, Alexandria Bay, NY! So thrilled to have my products for sale in the Thousand Islands! 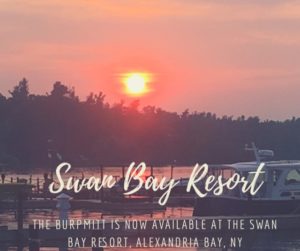 I now have a batch of professionally manufactured BurpMitts™ ready to purchase! They are currently available through this website, but I will be expanding to other markets in the future.

During this process I know I made quite a few mistakes and at times did things backwards. It was a bit of a one-step-forward-two-steps-back story dotted with constant roadblocks and obstacles. But I have learned a lot, and now I know the process of how to manufacture my very own physical product. I’ve written and published books, but this is a whole new level of excitement – taking an idea for an invention through to its creation is quite an experience and takes loads of patience and persistence. I did it!

I hope my product will help many parents get through those exhausting early baby days. Being a parent is the hardest work there is.

I now have a wonderful new manufacturer and have had a few samples made in order to finally decide which fabric I will ultimately use for the BurpMitt™. I chose an organic cotton, super absorbent fabric in a natural color. The fabric is also very soft, so it will be gentle on a baby’s skin. I have had the fabric sent to the manufacturer, had new labels made, and now we are officially in production!

Today has been a very discouraging day. My contact at the manufacturer has informed me that they cannot go forward with my project (and this time the email WAS meant for me). They have changed their production schedules to only high volume production lots of 1000 pieces or more. As the little guy, just starting out, I am only looking to produce a small batch at this point in time. My contact has been nice enough to refer me to another manufacturer who might fit my needs better. I am supposed to contact her later this week after he meets with her.

Once again, now I know why most products are Made in China.

For Babies Who Puke!

Stay Connected With Us